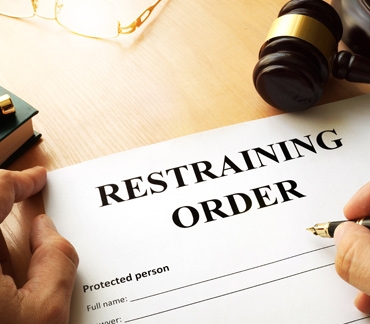 Restraining orders, often also called protection orders, are orders issued by judges that tell people to do or not do certain things. They can be used in non-criminal situations, such as telling property owners to stop activities that constitute a public nuisance and directing parties in a civil lawsuit to leave each other alone. Restraining orders in a civil context may also be called temporary injunctions (which can become permanent injunctions).

How Are Restraining Orders Issued?

In a typical situation, a victim applies to a judge for an order directing the aggressor to do a specific act, back off, or stay away. It is not uncommon for a party in a divorce or family law case to seek an injunction.  The two cases are separate, but related, and having a qualified attorney who can handle both cases may save you time and money.

What does the applicant need to prove?

People who ask for restraining or protective orders need to convince the judge that they’re necessary to prevent continuing or imminent harm. In a domestic violence situation, for example, the victim (the petitioner) supplies a sworn statement alleging facts that support a claim of serious and/or imminent harm, which enables a judge to issue a temporary order then and there, without notice to the object of the order (the respondent). After the respondent receives notice and within a few days, the judge will hold a hearing to determine whether to make the restraining order final.

At the hearing, the plaintiff must prove the truth of the allegations (by a preponderance of the evidence, not the stricter standard of beyond a reasonable doubt).

How long do protective orders last?

Most protective orders set a time limit on the duration of a final order (though extensions can be granted).  But even final orders can be modified if either party asks the judge to do so (and if the judge agrees).

How Are Restraining Orders Enforced?

An order directed at a domestic abuser or stalker is enforced by the police.  A respondent who violates a protective order may be arrested.
More in this category: « Property Division Collaborative Divorce »